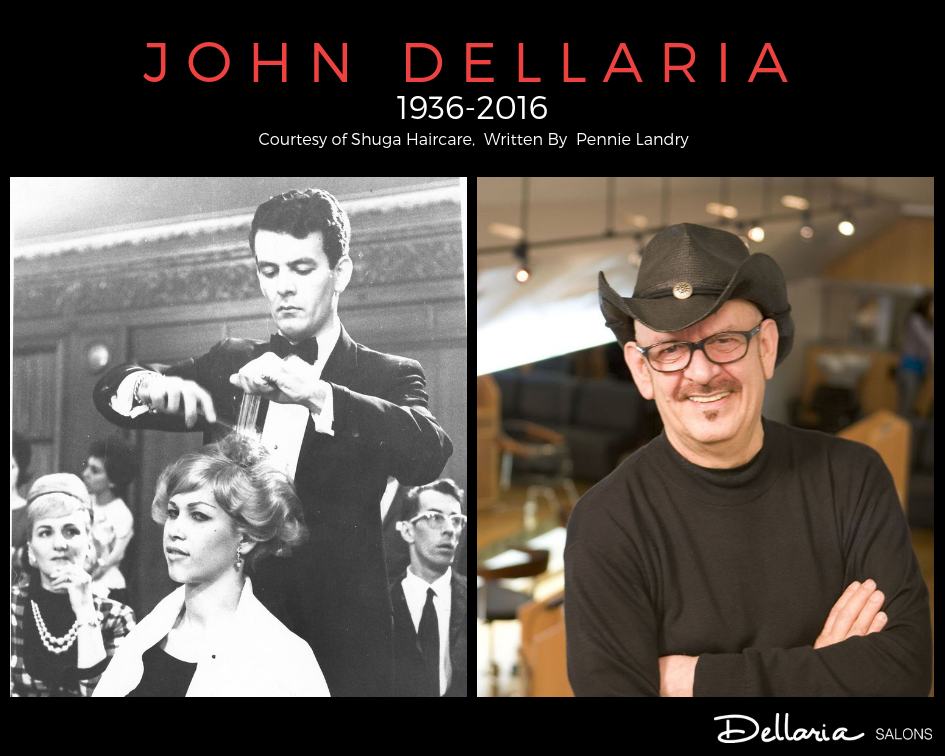 ‘It is my considered opinion that the hairdresser is the most influential person in any community. I tell you that a clever, thoughtful, ambitious hairdresser wields a power beyond the comprehension of most people.’  John Steinbeck

John Dellaria was a gentle yet powerful force in the hair and fashion community for over 60 years. A thoughtful visionary, John was affectionately referred to by his loyal clients and staff as “the hair brain.” A respected gentleman, John was a kind man of many talents and few words. When he did speak, it was inspiring and delivered in his signature ‘Bostonian’ accent.

When asked how he got his start in business, Dellaria replied: “A friend of mine wanted to go to beauty school. While he was being interviewed, I walked around the school. Immediately I was taken by the textures, the sculpture, the beauty, not to mention the women. I enrolled. He never did.”

John Francis Dellaria was born in Massachusetts on April 8, 1936 to Giacomo and Rita (Morrison) Dellaria. A star basketball player at East Boston High School, John chose beauty over brawn after graduation and enrolled at the Boston’s Mansfield Beauty Academy, which has a history dating back to 1909.

After graduating top of class, John’s illustrious career started as “Mr. John” of Continental Coiffures on Langley Road in Newton Centre, MA. Dellaria earned the title “Mr. John” due to his numerous first place wins in creative hairstyling competitions and his gentlemanly ‘chairside’ manner with his clients.

In the 1960s, Dellaria opened his first salon in Boston and for many years served as Chairman of Dellaria Limited with salons throughout Massachusetts.

In 1981, Dellaria opened a 5,000 square feet salon on 3 lofted levels in a historic landmark building at 433 W Broadway in SoHo, NY. The ‘ahead’ of its time salon had computers, video monitors, movable dryers (built to Dellaria’s specifications) dimmers at each station to allow the client to be flattered at every step, photographers studio lighting in the color area, a central vacuum system and floor to ceiling mirrors and freshly brewed espresso and cappuccino. Designed by John and manager Fred Pirkey, it was christened the “Love Boat”. However, New York magazine wrote that the salon was a rocketship. “It’s definitely the spankingest white space we’ve seen.” (New York/November 2, 1981)

At the salon opening Dellaria said, “New York itself is a tremendous source of creative energy. Being in SoHo allows me still greater freedom of thought and expression.” It also allowed John to expand his network of artists and entrepreneurs who pioneered the renaissance of SoHo into the thriving retail and services district it is today.

The multi-level Dellaria SoHo salon was designed to reflect the creative aesthetic of Dellaria and his stylists, while encouraging their many clients to experiment, to change, and to share Dellaria’s stylistic sensibility. NY editorial stylist Kevin Mancuso was one of the salon’s first Creative Directors, and on his webpage, Kevin credits John with teaching him ways to create softness in hair and how to distribute weight evenly across the head.

Dellaria’s philosophy was: “Hair is fashion. Fashion is change. Change means being today and sometimes tomorrow. Nothing dates us more than our hairstyle. It must remain current, reflecting where society is and who we are at the moment. For me, the hairstyle is the most creative way of expressing who we are and who we hope to be.”

John and many talented hairdressers bonded together in the 1990s to create BEAUTY CARES/HAIR CARES FOUNDATION, INC., a non-profit organization that focused on AIDS awareness through many benefit fashion shows like the always to be remembered benefit held at the Palladium on July 15, 1996.

During a career that spanned over 60 years, John mentored 1000’s of hairdressers who adored him and found inspiration in his approach: matching the hairstyle to the person. “Before you look at their hair, see the individual and decide what will make that person look and feel attractive.”

In 1990, Dellaria partnered with his best friend, Joe Tucci to form the professional hair care product company Ariella Inc. John, the product innovator, created D-Chrome bleach, a patented delivery system designed to protect colorists from the danger and inconsistency of powered bleaching agents. Ariella was the first beauty product manufacturer to bring aluminum packaging to the industry with the natural castor oil based Dressy Mist styling product. He was also the first to re-introduce pomades to the consumer. His Stay and Fix products were packaged in glass jars and targeted the growing population of male salon goers. Always committed first and foremost to the 1000’s of hair artists he trained and mentored and went on to open their own salons, Dellaria’s products are available today only in professional salons under Ariella Inc’s Shuga Hair Care label.

During his reign as one of America’s top hairdressers, John served as President of Intercoiffure Magazine and as the Fashion Director for six consecutive years. In 2011 he was honored as the first inductee into Intercoiffure North America’s Hall of Fame.

He was an honored guest platform artist across North America, Canada, Japan and Italy.  John Dellaria and his talented team of stylists and make-up artists were regularly featured in American and European publications such as Vogue, Harper’s Bazaar, Town & Country, Coiffure de Paris, French Vogue, Modern Salon, International Hairdresser  and New York magazine among many others.

In his signature all-black attire: jeans, T-shirt and Yankee cap, John was well-known in the  Chinatown restaurants where he gathered with clients and friends to cheer on his ‘hometown’ team, the NY Yankees.

In addition to his many contributions to the beauty industry, John will be remembered by those who were fortunate to know him as a loyal friend, who gifted us with his magnetic smile, kind acts and words, laughter and photos. John, the photographer, uniquely captured fashion and life through eyes that deeply appreciated the beauty in all people and things.

He is survived by his son, Alexander “Alex” Dellaria, daughter in-law Sabine and granddaughter Alesa, his brother Robert “Cory” Dellaria and sisters Maryanne Cholfin, Candice “Candy” Dellaria, Michelle Dellaria-Juffre and Cheryl Dellaria …and 1000s of hair and fashion stylists, friends and clients whose lives were touched by the hands and enriched by the heart of ‘the hair brain’ John Dellaria.

Dellaria left us on October 2, 2016, however his legacy lives on the streets of every city and town in America, in the hairstyles created by the beauty industry professionals who use his cutting system purely and with innovations they have added. His work as an influential hairdresser who contributed so much to so many is done. JD is smiling down, snapping photos and enjoying a Campari.

4 thoughts on “Tribute to John Dellaria”